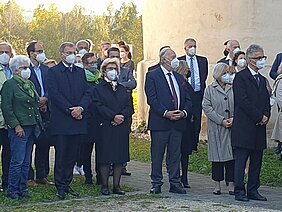 Around 130 people attended this year's commemoration in Hartheim. Among them were also relatives and descendants of those murdered as well as diplomatic representatives from 20 countries. In his speech, Governor Thomas Stelzer emphasised that the promise of "never again", which the people of our country made to themselves after liberation from National Socialism, must be kept alive and must be renewed again and again. "We need the Hartheim as we know it today so that the Hartheim of 1940 to 1944 can never exist again," said Stelzer.

This year's commemorative speaker, former Governor of Styria Waltraud Klasnic, underlined the importance of Hartheim Castle as a place of learning and remembrance - especially in current discussions. Hartheim "sustainably raises awareness of the inviolability of the human dignity of each individual". The topic of Nazi euthanasia is of "everlasting actuality". According to Klasnic, remembrance is necessary in order to learn for the future. Klasnic, who also works as an independent victim protection advocate and as chairperson of the umbrella organisation Hospice Austria, pleads for "the nationwide and affordable expansion of hospice and palliative facilities" in order to "enable a life in dignity from birth to death".

Following the memorial speech, prayers were said at the victims' cemetery by representatives of the Catholic and Protestant churches and the Jewish Community, and wreaths were laid by diplomatic representatives and organisations.

A recording of the memorial service can be viewed on the YouTube channel of the learning and memorial site: https://www.youtube.com/watch?v=LyuAX_d5RJI&t