Opening hours
Sie befinden sich hier:Home>
Stanisław Pawlak was transferred from the Mauthausen concentration camp to the Hartheim killing center in August 1941 and murdered. In November 2021, his granddaughter handed over a suitcase and documents from his estate to the Hartheim documentation center. 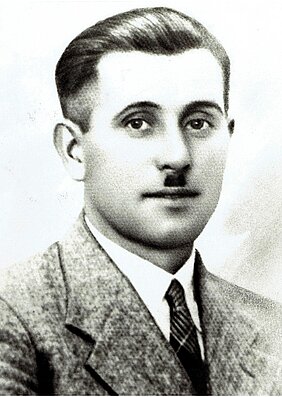 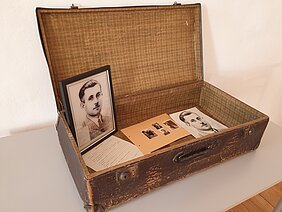 Stanisław Pawlak (*April 17, 1900) worked in the town hall of Koło (Poland), where he was arrested. There was time to pack a suitcase. Stanisław was taken to the Dachau concentration camp. He remained imprisoned there from May 6, 1940 to August 2, 1940. On that day he was transferred to Mauthausen concentration camp.

In the family it was reported that Stanisław suffered frostbite, which became infected and he was unable to work. On August 19, 1941, Stanisław Pawlak was transferred to Hartheim („Sonderbehandlung 14f13“) and murdered by carbon monoxide.

An acquaintance who survived his imprisonment in Mauthausen brought Stanisław's suitcase to his family in Kolo. His granddaughter Izabella Darska Havasi from Budapest has guarded him like a treasure over the past few decades. On November 15, 2021, she handed the case along with other original documents to the Hartheim documentation center. We thank you sincerely for the trust you have placed in us and we will cherish the memory of Stanisław Pawlak.